There is no link to this page. You're here because you were invited. You were invited because I feel you bring a potential to improve the situation. 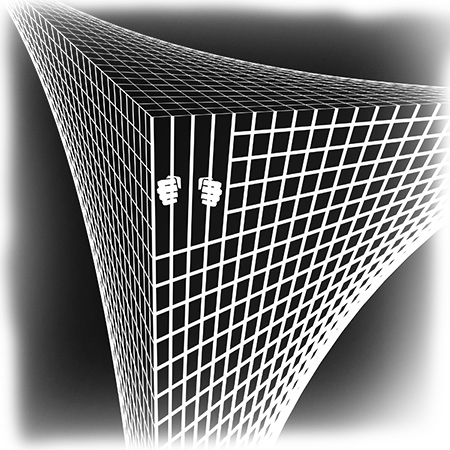 The land of the free has the largest collection of incarcerated people in the world, and by a large margin. 2.3 million and growing. America's incarcerated count is five times that of Europe (497,000), and we have less than half their population (330M to their 748M). Many factors contribute to this appalling statistic, but one of them is our shocking recidivism rate of over 50%. As far as protecting us from crime, that means our criminal justice system fails more often than it succeeds.

In my personal opinion, a big contributor to this is how our prisons sometimes fail to produce parolees with job skills empowering them to rejoin society with a living wage, and more importantly, with the self esteem encouraging good decisions. Picture yourself newly released from a 5-year sentence. Whatever you had as a career has likely atrophied into culinary, janitorial, laundry, license plate manufacturing, etc -- and perhaps whatever vocational advice you picked up in the exercise yard. These jobs have wages a tiny fraction of what those services would cost the prison through private contractors.

Most state prisons have established correctional enterprises, a mix of public agency and private company, with a mandate to improve on the job opportunities available to inmates. These enterprises have brought in vocational schools and produced tradesmen like carpenters, welders, plumbers, etc. This is a big improvement for the many inmates who have never had what we call a real job.

These enterprises also have the ability to form joint ventures with the private sector and other government agencies to bring work into a prison that is actually in demand by the changing needs of the private and public sector. These jobs have labor rates approximating outside wages, but with significant deductions for room & board, court-ordered fines related to the inmates' crimes, forced savings for their release, and a complex raft of deductions as mandated by the legislature. These enterprises have to battle Hollywood's false characterization of all inmates as knuckle-dragging miscreants and are deluged with proposals for menial jobs, including from their own state agencies to pick up trash along our highways, dig fire breaks, etc. The future of prison labor is in the hands of these enterprises and their ability to attract meaningful work with self esteem and a future for our inmates.

I have dedicated my legacy to improving this situation from a perspective where I have some hands-on experience, empowering inmates and parolees to earn a seat at our nation's digital table.

Over my years running one of the nation's only IT businesses inside a state prison, I have been introduced to three opposing camps, the prisons with their correctional industries, their liberal opponents lobbying for better inmate conditions, and the conservatives wanting us to stop coddling criminals. Neither camp has any villains, but they are often mired in a tribal us-vs-them mentality marked by name calling and stagnation.

The prisons are run by risk-averse humans trying to navigate a hundred years of conflicting legislation constraining their ability to innovate. Every new law says they must do this and must not do that. No law ever says we will roll back the constraints to a manager's ability to solve problems in new ways that leverage their experience and earnest desire to improve the situation.

Opposing them is the inmate-rights camp with accusations of slave labor, which is sometimes deserved but rarely ever produces a good outcome for the inmates. It feels good to rail against the prison-industrial complex and uncover yet another conspiracy to exploit inmates. Their heart is in the right place, but rarely does this camp ask themselves what outcome they have produced besides words. They are the hope for real change if they look beyond their slogans treating all prison labor to the same coarse solution.

The third camp is best exemplified by an event at my prison where management ordered some pizzas for the inmates to celebrate a career accomplishment that they earned. At least one concerned citizen saw the incoming pizzas and complained that we were pampering criminals when they were sent to prison to be punished. I was once told to be ashamed of myself for running a business that competes against regular working Americans and gives their jobs to criminals. This victims-rights camp fails to recognize that these inmates will be released to their neighborhood, and it's up to all of us to give them a shot at being good neighbors, to benefit their community, and to avoid the next crop of victims.

Imho, these warring camps could be brought together for the common good if we all accepted that inmate labor needs to be separated into 3 categories that make clearer what should be done for each category.

Prisons are prone to mixing the above three to justify dead end jobs by saying that there is something to be learned doing any job, and the money saved goes into the support programs made available to inmates. Quite true, but the temptation is to stretch definitions to balance today's operating budgets rather than to reduce long-term recidivism. The inmate-rights camp is just as likely to watch a documentary focused on sensationalism rather than facts, portraying the most exploitative example of inmate labor, and then condemning everything with popular but threadbare rallying cries.

What We Have Done 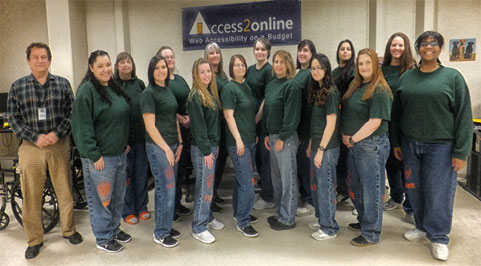 Navigating the above warring camps and the regulations that constrain us, we have accomplished the following:

Although I directed these efforts, the results are primarily the product of a work ethic on the part of the inmates that I have not seen in my many years running a private sector IT company. Within a few minutes of an inmate's job interview, I can tell if I'm speaking to someone who has used prison to make a fundamental change in the life they wish to lead. These imates look at work as the fuel that will power their life to come, and it becomes a most important part of their days. I have had an inmate look me in the eyes and say, "Monday mornings are the best part of my whole week." When was the last time we said that?

When our inmate analysts sit down at their computer, they leave their regimented world behind and fire up their creativity to solve real problems, in our case, to help the disabled. I have personally witnessed a palpable increase in self esteem as they speak terminology that their Correctional Officers can't understand, where visiting webmasters start taking notes to hear answers to their accessibility questions with clarity and authority, where inmates present high-tech webinars, an unprecedented event a few years ago. Our analysts will go into the world redefining ex-felon.

If any of this is in doubt, I suggest hearing straight from our inmate analysts in this 4-minute video.

What We Will Do

We have worked hard over the years to run an innovative business remediating online content for the disabled while remediating human beings to rejoin lawful society. Our prisons and legislators have noticed. They have encouraged me to replicate Access2online into other correctional businesses that give inmates the same opportunity to earn job skills with a future in IT. For this reason, I have launched a non-profit called Second Chance Net with a ground-breaking program to take IT business ideas to proof-of-concept inside our prisons via incubators, aka accelerators.

Whichever of the 3 camps above you call home, I invite you to join me in this adventure to go beyond unending debates to action, to help produce results that will allow ourselves to be called change-makers in a social enterprise.